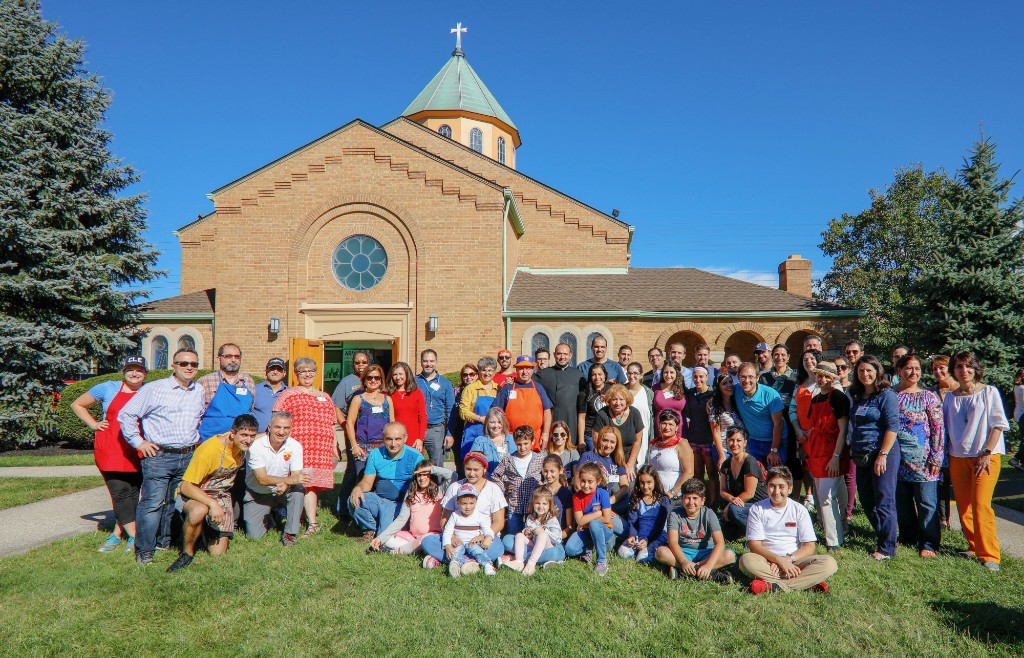 Since the arrival of the first Armenians in Cleveland near the turn of the 20th century, interest in perpetuating the religious and cultural aspects of Armenian life has been constant. The first parish was organized in 1911-12, and Bishop Mousheg Seropian celebrated the first Divine Liturgy at Grace Episcopal Church on East 91st Street.

Between 1927 and 1928, Fr. Vahram Nazaretian served as the parish pastor. The community did not own a permanent sanctuary, and for many years services were held only a few times a year at various churches in the area.

It was not until 1950 that a campaign was launched to collect $50,000 for a new church and hall. The present seven-acre property was purchased in April 1958 for $37,500. In June 1960, the community welcomed His Holiness Vasken I, the late Supreme Patriarch and Catholicos of All Armenians, who blessed the newly acquired property and encouraged the community to complete the construction project.

The groundbreaking ceremony was held on March 11, 1962, and construction of the first Armenian Church in Ohio began in August of that year. The building was designed to reflect elements of traditional Armenian church architecture. The foundation blessing and cornerstone laying ceremonies were held on December 2, 1962. In accordance with church canon, 16 godfathers participated in the ceremony, representing the eleven apostles, four evangelists, and St. Gregory the Enlightener—the patron saint of Armenia.

A little more than a year later, on April 12, 1964, the new church was consecrated by Archbishop Manoogian, with the assistance of the Very Rev. Fr. Vasken Kebreslian, Rev. Fr. Arnak Kasparian, Rev. Fr. Diran Papazian, Very Rev. Fr. Jirayr Tashjian, and Deacon Nersess Jebejian. The church’s godfather, Kegham K. Goekjian, decided to name the house of worship St. Gregory of Narek Armenian Church in honor of the 10th century Armenian monk who authored the Book of Lamentations, a masterpiece of Armenian ecclesiastical literature.

On April 24, 1966, a granite monument was dedicated on the church grounds to commemorate the victims of the Armenian Genocide of 1915. An annual requiem service takes place before this monument each year on April 24.

The first sacraments performed at St. Gregory of Narek Church was the baptism of Nancy Davidian and the confirmation of Kenneth and Steven Davidian on April 19, 1964. Jack and Eileen Hacherian were the first couple to marry at the church in August 1964. Since then, countless sacraments have been performed, perpetuating the richness of the religious heritage of the Armenian people.

Another milestone for the Cleveland Armenian community was the construction of the church’s Cultural Hall. The hall was designed to complement the church architecturally, and was dedicated on April 9, 1972, by Archbishop Torkom Manoogian, then-Primate of the Eastern Diocese. Today the hall—with its classrooms, meeting rooms, and other facilities—serves the needs of the local Armenian community, and is also home to a number of Cleveland-area functions throughout the year.